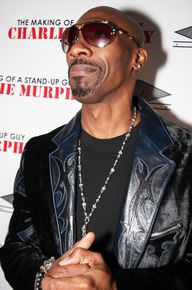 Title
Charlie Murphy at an event to promote his book The Making of a Stand Up Guy in December 2009.
Author
Timothy M. Moore at http://www.flickr.com/photos/photocology/
Source
http://commons.wikimedia.org/wiki/File:CharlieMurphyDec09.jpg
Attribution
Timothy M. Moore
License
CC BY 3.0

Charlie Murphy gained worldwide recognition after he wrote and featured in the comedy series named “Chappelle's Show”. Some other sitcoms and television movies that the American actor/comedian appeared in are:

His younger brother is the legendary actor and comedian, Eddie Murphy.

He left behind three children.

He died in 2017 after battling leukemia.

He joined the US Navy in 1978 after serving ten months in prison.

Charlie's birthday is in 334 days

How old was Charlie when he died?

Charlie Murphy would be 63 years old if he was alive today.

Where was Charlie from?