Chris Elliott is an Emmy Award-winning American actor and comedian famous for his work on the TV show Late Night with David Letterman as well as for playing television characters such as Mickey Aldrin on the sitcom How I Met Your Mother and Peter MacDougall on the CBS sitcom Everybody Loves Raymond. His notable film credits include 1994's Cabin Boy, 2009's Dance Flick and 2012's The Dictator.

He is the son of Lee and comedian Bob Elliot. He has four older siblings. In 1986, he and Paula Niedert tied the knot. The marriage produced two children Bridley and Abby, who followed her father's footsteps to become a comedian and an actress.

He is an accomplished author, who has published a number of popular books.

Between 1984 and 1987, he won the Primetime Emmy Awards four consecutive times. 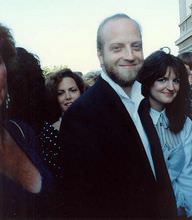 Chris' birthday is in 241 days