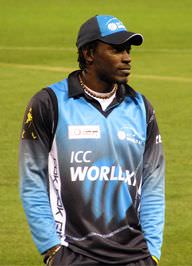 Chris Gayle is a professional Jamaican cricketer regarded as one of the finest batsmen of his generation. From 2007 to 2010, he served as the captain of the West Indies' Test side. In addition to his successful career with the West Indies, he is also known for his glittering career with a number of teams, including the Jamaica national cricket team, the Kolkata Knight Riders and the Royal Challengers Bangalore. He is one of a handful of players in world cricket to achieve the great feat of scoring two triple centuries.

He became a father for the first time in 2016 after Natasha Berridge bore him a daughter named Blush.

He sparked a sexism scandal in 2016 after flirting with renowned Australian female reporter Mel McLaughlin during a live TV interview. He was subsequently fined for his actions.

Chris' birthday is in 77 days

He was born in Kingston.