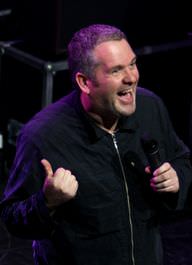 Chris Moyles is an American television host, radio personality, and author who gained his celebrity status as the host of Radio X's “The Chris Moyles Show”.

As an author he has published many books with some titled "The Gospel According to Chris Moyles" and "The Difficult Second Book".

He has further appeared in a number of TV series including "The Friday Night Project", "The Charlotte Church Show" and "Hotel Babylon."

As a teen, he had his first taste of radio broadcasting as a volunteer at a local hospital radio station.

In 2011, he and David Vitty set a world record by broadcasting a fifty-two-hour radio program.

He is known to be an avid supporter of Leeds United Football team.

At a point in his career, he became the longest-serving breakfast host on BBC Radio 1.

Chris' birthday is in 119 days

He was born in Temple Newsam, Leeds, West Riding of Yorkshire, England, UK.

What is Chris Moyles' height?

People born on February 22 fall under the Zodiac sign of Pisces, the Fish. Chris Moyles is the 1108th most popular Pisces.

Aside from information specific to Chris Moyles' birthday, Chris Moyles is the 1345th most famous English.

In general, Chris Moyles ranks as the 15047th most popular famous person of all time. “The Famous Birthdays” catalogs over 40,000 famous people, everyone, from actors to actresses to singers to tiktok stars, from serial killers to chefs to scientists to youtubers and more. If you're curious to see who was born on your birthday, you can use our database to find out who, what, where, when and why. You can search by birthday, birthplace, claim to fame or any other information by typing in the search box, or simply browse our site by selecting the month, the day, the horoscope, or any other clickable option.