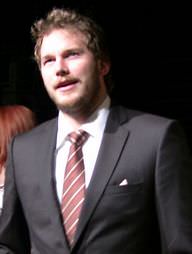 Chris Pratt is an American actor who started out in TV shows then graduating to movies, the most notable being Guardians of the Galaxy (2014) and Jurassic World (2015).

Both he and his wife collected dead bugs before they met. The marriage resulted in them combining their collections!

Chris loves fishing and hunting. He speaks fluent German which he learnt at school. He has one son.

Chris' birthday is in 137 days

He was born in Virginia, Minnesota, U.S..