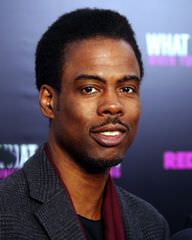 Title
Chris Rock at the 2012 premiere of What to Expect When You're Expecting in New York
Author
David Shankbone
Source
http://commons.wikimedia.org/wiki/File:Chris_Rock_WE_2012_Shankbone.JPG
License
CC BY 3.0

Like many comedians of his generation, Chris Rock got his start as a stand-up comedian at a Catch a Rising Star club. An impressed Eddie Murphy helped Chris Rock catch his big break, providing him with a role in Beverly Hills Cop II. He next found success on Saturday Night Live, starting in 1990. After three years, he left SNL to star on the sketch show In Living Color. Chris Rock has since had roles in popular films such as Down to Earth, Madagascar, and Grown Ups.

Chris' birthday is in 178 days

He was born in Andrews, South Carolina, U.S..