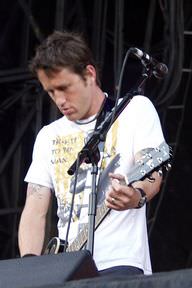 Before his fourteenth birthday, Chris Shiflett had already performed for a local music group. He later joined the Lost Kittenz band before he was hired by the No Use for a Name music band in 1995. He helped them to complete a number of projects including their 1997 album “Making Friends”.

The famous American guitarist is widely known for his association with the Foo Fighters rock band which he joined in 1999. His performance has helped the group to publish many successful albums including “Echoes, Silence, Patience & Grace” and “Medicine at Midnight”.

Between 1995 and 2019, he performed with the cover band called ‘Me First and the Gimme Gimmes’. In 2003, he formed his own music group known as Jackson United. That same year, they released their first EP titled “Jackson”.

He has also performed with the Chris Shiflett & the Dead Peasants group which he established in 2010. Other groups that he has worked with include Rolling Stones, and Black Sabbath.

His brother, Scott Shiflett is also a well-known musician. He’s known to be the husband of Cara Shiflett.

As a member of Foo Fighters, he has received many laurels including the Grammy Award, Brit Award, and the Kerrang! Award.

His podcast is named “Walking the Floor”.

Chris' birthday is in 218 days

He was born in Santa Barbara, California,[1] U.S..