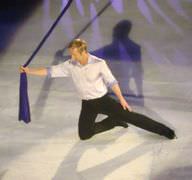 In 1989, he and Jayne were admitted to the World Figure Skating Hall of Fame. In 1999, he was appointed an Officer of the Order of the British Empire.

His parents were ballroom dancers. He has been married twice and he has 2 sons.

He began skating at the age of 10, when he received a pair of skates as a Christmas present!

Christopher's birthday is in 173 days