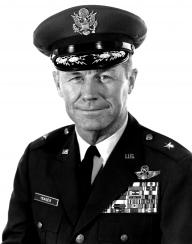 Ex-American Air Force personnel, Chuck Yeager rose to fame, in 1947, after he flew an aircraft, in level flight, beyond the speed of sound – in so doing, he set a record as the first pilot to achieve such a feat.

He joined the army in 1941 and served as a pilot until his retirement in 1975. He was instrumental in his country’s efforts during World War II where he gunned down lots of German airplanes. He also fought in other wars such as the Vietnam and Korean wars.

His parents, who were farmers, were named Albert Hal and Susie Mae Yeager. He was a brother to siblings namely Hal Jr, Roy, Pansy Lee, and Doris Ann. His sister, Ann, died at the age of two.

His marriage to Glennis Dickhouse came to an end in 1990 after she passed away due to ovarian cancer. Their five and half decade union produced four children namely Mikey, Don, Sharon and Susan. In 2003 he tied the knot with actress, Victoria D'Angelo.

He was a cousin to former baseball star, Steve Yeager.

He was educated at Hamlin High School, where he played football and basketball. He completed his high school studies in 1941.

He’s considered as one of the most-decorated servicemen of his time. Some of his awards and medals are “U.S. Air Force Command Pilot Badge”, “Air Force Distinguished Service Medal”, and “American Defense Service Medal”.

Yeager was featured in the movie titled “The Right Stuff”.

Later, I realized that the mission had to end in a let-down because the real barrier wasn't in the sky but in our knowledge and experience of supersonic flight.Chuck Yeager

You do what you can for as long as you can, and when you finally can't, you do the next best thing. You back up but you don't give up.Chuck Yeager

Chuck Yeager was a famous American pilot and general, who was born on February 13, 1923. As a person born on this date, Chuck Yeager is listed in our database as the 62nd most popular celebrity for the day (February 13) and the 96th most popular for the year (1923).

People born on February 13 fall under the Zodiac sign of Aquarius, the Water Bearer. Chuck Yeager is the 2118th most popular Aquarius.

Aside from information specific to Chuck Yeager's birthday, Chuck Yeager is the 15350th most famous American.

In general, Chuck Yeager ranks as the 29485th most popular famous person, and the 19th most popular pilot of all time. “The Famous Birthdays” catalogs over 25,000 famous people, everyone, from actors to actresses to singers to tiktok stars, from serial killers to chefs to scientists to youtubers and more. If you're curious to see who was born on your birthday, you can use our database to find out who, what, where, when and why. You can search by birthday, birthplace, claim to fame or any other information by typing in the search box, or simply browse our site by selecting the month, the day, the horoscope, or any other clickable option.