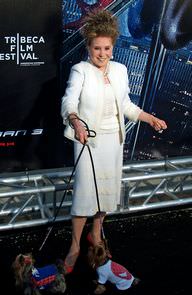 The American biographer and gossip writer, also known as Cinder Heller, has written several articles in publications such as New York Post and Sunday Today in New York. Cindy Adams has made appearances on the American news-and-talk show “Good Morning America”. She also opened a business venture called Jazzy.

Adams’ mother was Jessica Sugar who was an executive secretary for the New York City Water Department.

She and Joey Adams were married a year after meeting each other on the same radio show. The marriage took place on February 14, 1952. Joey died in 1999, leaving her as a widow.

The writer studied at Andrew Jackson High School but did not graduate.

Adams began working as a gossip writer for New York City’s paper the New York Post in 1979. She also made appearances on the local morning news television show which aired on WNBC: “Sunday Today in New York” and the afternoon news program  “Live at Five”.

She was a panel member on NBC’s television game show “To Tell the Truth '' in 1990. The show was hosted by Lynn Swann.

Cynthia's birthday is in 144 days

Where is Cynthia from?