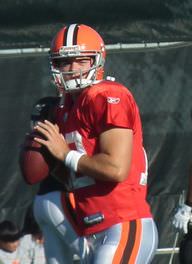 Daniel McCoy, better known as Colt McCoy, started his football career while in high school. After achieving several accolades in the sport, he went to play for the Texas Longhorns team of the University of Texas at Austin.

In 2010, the Cleveland Browns selected him in round three of the NFL draft. He has played for the Washington Redskins, San Francisco 49ers, New York Giants and Arizona Cardinals.

He is the first of the three children of Debra Kay and Steven Brad McCoy, who coached him in high school. His younger brother, Case also played football for the Texas Longhorns. He has three children with Rachel Glandorf, whom he married in July 2010.

In college, he won national awards such as the Davey O’Brien Award, Maxwell Award, the Manning Award, the Chic Harley Award and the Johnny Unitas Golden Arm Award, all in 2009.

During his time at the University of Texas, he participated actively in the community service programs. 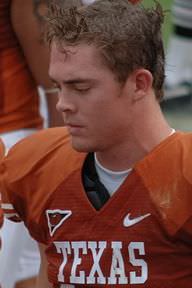 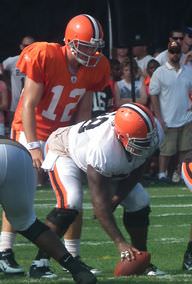 Title
College football game betwen University of Texas at Austin and Texas A&M University - UT quarterback Colt McCoy after being injured and prior to being taken off the field on a cart because of a cheap hit by the Texas A&M player on Colt McCoy.
Author
Johntex
Source
http://commons.wikimedia.org/wiki/File:Lone_Star_Showdown_2006_Colt_McCoy_injured.jpg
License
CC BY 2.5

Colt's birthday is in 335 days

Where is Colt from?