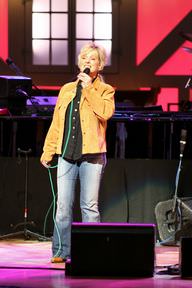 She is an American Music icon who is mainly into writing and country music.

When she was born, she was given the name Constance June Meador. She lived with both parents, her mother was Wilma Meador and her father was Hobart Meador. At a young age she suffered from mental breakdown as a result of the abuse she received from her father

When her parents divorced, she became part of a larger family after her mother married Tom who brought eight children to the marriage. They ended up being fifteen children in the new family. She started playing the guitar when she was recuperating in the hospital after an accident. Her new family had a lot of music savvy people which helped her. As of 1997, she had been married four times.

She has released a lot of albums and tracks starting with her self-titled album “Connie Smith” in 1965. She released “Connie Smith Sings Great Sacred Songs” in 1966 and “I Never Once Stopped Loving You” among others.

Title
Connie Smith alongside her guitar player at the Grand Ole Opry (May 18, 2007).
Author
cliff1066™
Source
http://commons.wikimedia.org/wiki/File:Connie_Smith-Opry_5.jpg
License
CC BY 2.0

Connie's birthday is in 363 days

Where is Connie from?

She was born in Elkhart, Indiana, U.S..