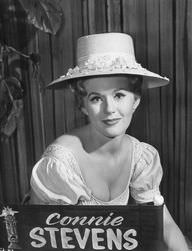 Connie Stevens has successfully established herself as an actress, singer, director and producer; having first debuted in the film industry as an actress in 1957. The following year saw the release of her first album, “Concetta”.

She rose to fame while portraying Cricket Blake in the detective television series, “Hawaiian Eye” from 1959.

The first film she worked on as a director, screenwriter, actress and producer, “Saving Grace B. Jones”, was released in 2009.

She was named Concetta Rosalie Ann Ingolia at birth by her parents, Eleanor McGinley and Peter Ingolia. In the early 1960s, she was the girlfriend of actor Glenn Ford.

“Sixteen Reasons” is one of her music career’s biggest hits.

Connie Stevens' birthday is in 187 days

Where is Connie Stevens from?