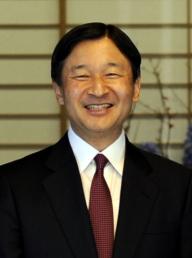 As a descendant of the famous Imperial Family, Naruhito became Japan’s Emperor in 2019, taking over from his dad, Akihito. According to the country’s official calendar, his time on the throne would be described as “the Reiwa era”.

Known for his interest in water conservation, it is believed that most of his policies would be targeted at protecting the water bodies in the country.

He’s the son of Crown Princess Michiko, who served as the Empress consort of Japan during the reign of Akihito. He is the grandson of Emperor Shōwa, also known as Hirohito.

He married Masako Owada in 1993. Their daughter, Aiko, Princess Toshi was born in 2001.

He has been decorated with many medals including the Supreme Order of the Chrysanthemum, King Willem-Alexander Inauguration Medal (Netherlands), and Grand Cross of the Order of Christ (Portugal).

He goes into the history books as the 126th person to ascend the throne.

He was named the honorary president ahead of the Tokyo Olympic Games which was from July to August 2021.

After his death, his name will be changed to Emperor Reiwa.

Growing up, he loved playing the viola.

Where is Crown Prince Naruhito from?

He was born in Togu Palace, Tokyo.

People born on February 23 fall under the Zodiac sign of Pisces, the Fish. Crown Prince Naruhito is the 1161st most popular Pisces.

In general, Crown Prince Naruhito ranks as the 15737th most popular famous person, and the 22nd most popular royalty of all time. “The Famous Birthdays” catalogs over 40,000 famous people, everyone, from actors to actresses to singers to tiktok stars, from serial killers to chefs to scientists to youtubers and more. If you're curious to see who was born on your birthday, you can use our database to find out who, what, where, when and why. You can search by birthday, birthplace, claim to fame or any other information by typing in the search box, or simply browse our site by selecting the month, the day, the horoscope, or any other clickable option.