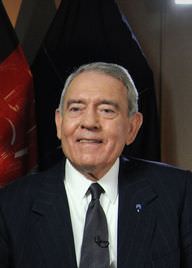 Daniel Irvin Rather started his career in journalism as a reporter for the Associated Press in 1950. He transitioned to television reporting in 1959 with the ABC affiliate, KTRK-TV in Houston. It was at KHOU-TV, also in Houston, two years later that he came to national prominence for showing a radar image map of Hurricane Carla which prompted 350,000 persons to evacuate safely. As the news anchor for “CBS Evening News” for 24 years, he became one of the United States’ “Big Three” nightly news anchors from the 1980s to the early 2000s.

His parents’ names were Byrl Veda Page and Daniel Irvin Rather Sr. He has been married to Jean Goebel since 1957. They have two children together.

His colourful live broadcast analogies and descriptions were nicknamed “Ratherisms”.

Title
Dan Rather, anchor and editor of Dan Rather Reports on the cable network HDNet, speaks before a group of North Atlantic Treaty Organization Training Mission Afghanistan commanders in the Leadership Conference Room on Camp Eggers, Kabul, Afghanistan, July 27, 2011, about his experiences in his 61 years of journalism. He spoke in depth about the historical and tumultuous relationship between the media and military, and the role each has played in American opinion. Dan Rather and his HDNet production team toured various training, recruiting, and educational centers around Afghanistan collecting footage for a segment set to air in early September this year on the coalition to Afghan security forces transition. (U.S. Air Force photo by Senior Airman Kat Lynn Justen)
Author
Senior Airman Kat Lynn Justen (U.S. armed forces)
Source
http://commons.wikimedia.org/wiki/File:Dan_Rather_in_Afghanistan-2011.jpg
License
Public domain

Viewers of Dan Rather, also viewed

F.A.Q. about Dan Rather

Dan's birthday is in 28 days

Where is Dan from?