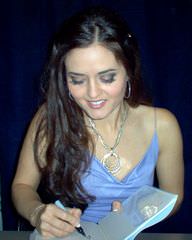 Danica McKellar is an actress and author who emerged into the public spotlight for playing Winnie Cooper in the television series The Wonder Years. She is also a mathematician known for being the author of books such as Math Doesn't Suck and Kiss My Math. Her books encourage girls to have confidence in mathematics.

She began acting in the mid 1980s. Her firs television role was in the 1985 television series The Twilight Zone.

In 2009, she got married to Mike Verta. The marriage produced a child before ending in 2012. Her second marriage was to Scott Sveslosky in November 2014.

She majored in mathematics at UCLA and graduated with a Bachelor of Science in Mathematics with honors.

Danica's birthday is in 29 days

Where is Danica from?

She was born in La Jolla, California, U.S..