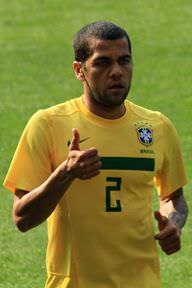 Daniel Alves is a Brazilian soccer player who began his senior club career with Bahia in 2001. He later played for Sevilla for six years before joining Barcelona in 2008. He became a member of the Brazilian national football team in 2006. He is one of the most decorated footballers of his generation.

Throughout his career, he has won several titles, including multiple La Liga and UEFA Champions League titles with Barcelona. He was the recipient of the 2009 La Liga's Best Defender Award, among other awards and honors.

In 2014, while playing an away game against Villareal, a banana was thrown at him. Interestingly, he picked up the banana and ate it. He later stated that such incidents need to be taking with humor so that racists don't achieve their aim. Following that incident, several other footballers, including Neymar took photographs of themselves eating bananas.

Prior to becoming a professional footballer, he was a farmer.

He featured alongside Lionel Messi and Ronaldinho during his playing days with Barcelona FC.

Daniel's birthday is in 86 days

He was born in Juazeiro, Brazil.