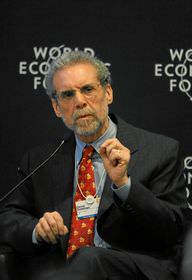 Daniel Goleman has made a name for himself as an author, science journalist and psychologist. He is best known for his best-selling book, “Emotional Intelligence”, which was first published in 1995.

From the mid-1980s to the mid-1990s, he wrote on behavioral sciences for The New York Times. As an academician, he taught at Harvard University and was a co-founder of the Collaborative for Academic, Social and Emotional Learning at the Child Studies Center, Yale University. He has also served as a co-director of Rutgers University’s Consortium for Research on Emotional Intelligence in Organizations.

His father, Irving Goleman was a humanities professor while his mother, Fay Weinberg was a sociology professor. He has been married to Tara Bennett-Goleman.

He was a recipient of the American Psychological Association’s Career Achievement Award for Excellence in the Media in 1984.

He has been a board member of the Mind & Life Institute.

Daniel's birthday is in 153 days

He was born in Stockton, California, U.S..