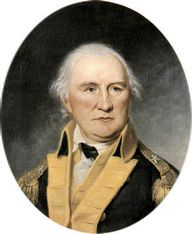 Daniel Morgan was revered for his tactical play on the battlefield and his foresight and vision during the American Revolutionary War (1775-1783). The military man and politician is best known for the role he played in clamping down on the Whiskey Rebellion in the early 1790s.

The Brigadier General was born to Welsh immigrants James Morgan and Eleanor Lloyd. He was relatively quick to anger and abruptly left home due to a fight with his father. The 17-year-old Morgan worked odd jobs in the streets of Pennsylvania before finally finding himself as a sharpshooter assigned to protect the Western settlements from Indian raids, which were often supported by the French. This endeavor, as well as many others, helped he acquire a reasonable fortune, and he purchased a number of properties and slaves.

Morgan quickly rose through the ranks to become an officer of the Virginia militia and recruited 96 men to aid him in the American Revolutionary War in 1775. He also had the chance to serve under Benedict Arnold in his expedition to Quebec and led forces in the Saratoga campaign in 1777. Two years later, he left the Continental Army only for him to return following the loss suffered at the Battle of Camden in 1780. He steered American patriots to victory at the Battle of Cowpens in 1781.

He retired from the army for a second time after the end of the war in 1783. However, he picked up his military uniform again and participated in the suppression of the Whiskey Rebellion (1791-1794).

In the last decade of his life, he entered into politics and was elected to the U.S. House of Representatives, representing the 1st district from Virginia. His stay in the House was from 1797 to 1799, when he retired.

Morgan was married to Abigail Curry, with whom he fathered two children. The American Revolutionary War fighter and politician passed away in 1802. He was survived by his two children.

Daniel Morgan was a member of the Federalist Party, a group of traditionalists, led by Alexander Hamilton, who favored federal rights, strong and centralized government over state rights.

American general and politician, 1st President of the United States

Daniel's birthday is in 280 days

How old was Daniel when he died?

Daniel Morgan would be 286 years old if he was alive today.

Where was Daniel from?

He was born in Junction, Hunterdon County, New Jersey, U.S..