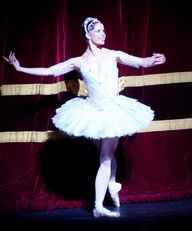 Title
Darcey Bussell during a curtain call, after a performance of Theme and Variations
Author
scillystuff from UK
Source
http://commons.wikimedia.org/wiki/File:Darcey_Bussell.jpg
License
CC BY 2.0

In 1987, Darcey Bussell joined the Sadler's Wells Royal Ballet group which placed him on the road to greatness. The following year, he appeared in a stage play titled “The Prince of the Pagodas” which earned her a spot in the Royal Ballet.

She has also performed in some well-known classical with some titled “Winter Dreams” and “The Sleeping Beauty”. The English ballerina also worked with the New York City Ballet and the Hamburg Ballet before retiring in 2007.

Bussell has been one of the most popular television personalities in the United Kingdom. In 2009, he was named as one of the judges of the reality series “Strictly Come Dancing”. He has also appeared in other well-known television shows such as “The ONE Show” and BBC Two’s documentary “Darcey dances Hollywood”.

She has also worked as a model and has been used by many brands like Marks & Spencer, and Mulberry. Bussell has also appeared in loads of publications like Vanity Fair, and Vogue. Aside from her work in the entertainment world, she is also known to be a writer. She has published many books with some titled “Magic Ballerina” and “The Young Dancer”.

She’s the daughter of John Crittle, a renowned Australian business executive. Her mother Andrea Williams is English. In 1997, she was married to Angus Forbes, and in 2004 they had their second child.

She studied at Fox Primary School before joining the Arts Educational School. She was later trained at the Royal Ballet Lower School.

In 2018, she was honored with the Dame Commander of the Order of the British Empire medal. She received the John F. Kennedy Center for the Performing Arts gold medal in 2006.

She performed at the closing ceremony of the Summer Olympics in 2012.

Darcey's birthday is in 298 days

Where is Darcey from?

People born on April 27 fall under the Zodiac sign of Taurus, the Bull. Darcey Bussell is the 1779th most popular Taurus.

In general, Darcey Bussell ranks as the 20729th most popular famous person of all time. “The Famous Birthdays” catalogs over 40,000 famous people, everyone, from actors to actresses to singers to tiktok stars, from serial killers to chefs to scientists to youtubers and more. If you're curious to see who was born on your birthday, you can use our database to find out who, what, where, when and why. You can search by birthday, birthplace, claim to fame or any other information by typing in the search box, or simply browse our site by selecting the month, the day, the horoscope, or any other clickable option.