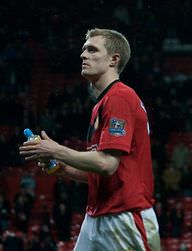 Darren Fletcher is a talented retired Scottish soccer player and coach who rose through the ranks of Manchester United's Youth Academy. He spent about 2 decades with the club winning several honors including the FIFA Club World Cup, FA Cup, and the UEFA Champions League.

After leaving the club, he went on to play for teams like West Bromwich Albion, and Stoke City. As versatile as he was, he was used in many positions including central midfield, right-wing, and defense.

He also represented his native country in a number of high-profile tournaments, including the UEFA Euro in 2004 and 2012.

After the 2002/03 season, he was awarded with the Denzil Haroun Reserve Player of the Year.

He was inducted into the Scottish FA International Roll of Honor in 2010.

In 2020, he was named as Manchester United's technical director.

Before joining the youth team of Manchester United, he played for teams like Hutchison Vale Tynecastle Boys Club, and Celtic Boys Club.

Darren Fletcher's birthday is on February 1, 1984.

Darren's birthday is in 56 days

Where is Darren from?

He was born in Dalkeith, Scotland.

What is Darren Fletcher's height?

People born on February 1 fall under the Zodiac sign of Aquarius, the Water Bearer. Darren Fletcher is the 1041st most popular Aquarius.

In general, Darren Fletcher ranks as the 15000th most popular famous person, and the 347th most popular soccer player of all time. “The Famous Birthdays” catalogs over 40,000 famous people, everyone, from actors to actresses to singers to tiktok stars, from serial killers to chefs to scientists to youtubers and more. If you're curious to see who was born on your birthday, you can use our database to find out who, what, where, when and why. You can search by birthday, birthplace, claim to fame or any other information by typing in the search box, or simply browse our site by selecting the month, the day, the horoscope, or any other clickable option.