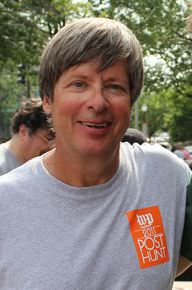 Dave Barry is a renowned American writer who started his career as a journalist in 1971. He was first employed by the Daily Local News where he was used as a reporter. He later moved to The Philadelphia Inquirer, before making his name with the Miami Herald where he wrote many humor columns.

A versatile writer, Barry has also released many bestselling books. He published his first novel in 1999 which was named “Big Trouble”. Some of his other popular novels are titled “Peter and the Starcatchers” and “The Bridge to Neverland”.

Aside from his writing abilities, he’s also known to be a good musician. During his early years, he performed with a band called Federal Duck. He was one of the founders of the Urban Professionals music group. He also played the guitar for the collective known as the Rock Bottom Remainders.

His father was simply referred to as David. Before marrying Ann Shelnutt in 1976, he had married and divorced Beth Lenox. During their time together they had a child called Robert. In 1996, he became the husband of American journalist Michelle Kaufman. The couple are blessed with a daughter named Sophie.

After his education at Pleasantville High School, he entered into Haverford College where he read English.

He won the Pulitzer Prize for Commentary award in 1988. He was also the recipient of the Walter Cronkite Award for Excellence in Journalism in 2005.

The American sitcom entitled “Dave's World” was based on his “Dave Barry Turns 40” books.

His maiden novel was adapted into a movie of the same name which was released in 2002. It featured the likes of Patrick Warburton and Rene Russo.

Dave's birthday is in 214 days

Where is Dave from?