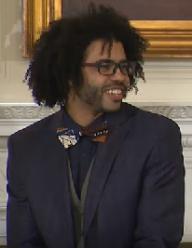 American rapper, singer-songwriter and actor, Daveed Daniele Diggs is best recognized for being the vocalist of the hip hop group known as Clipping.

He is also widely noted originating the roles of Thomas Jefferson and Marquis de Lafayette in the 2015 musical, Hamilton.

He was born to Dountes and Barbara Diggs.

In 2016, Diggs won a Tony Award for the Best Feature in a Musical.

His group, Clipping’s 2017 track titled The Deep earned a nomination for a Hugo Award for Best Dramatic Presentation (Short From) in 2018.

He won a Grammy Award for Best Musical Theater Album in 2015.

In 2018, he was the recipient of the Innovator Award at the Atlanta Film Festival.

His Alma mater, Brown University conferred an honorary Doctor of Fine Arts degree on him in May 2017.

He released his debut solo rap album titled, Small Things to a Giant in 2012.

Diggs starred alongside Owen Wilson and Julia Roberts in the 2017 film, Wonder

He has voiced roles in Disney animation, Zootopia and animated film titled Ferdinand.

He has featured in a number of series including Black-ish, Unbreakable Kimmy Schmidt and The Get Down.

People born on January 24 fall under the Zodiac sign of Aquarius, the Water Bearer. Daveed Diggs is the 373rd most popular Aquarius.

Aside from information specific to Daveed Diggs' birthday, Daveed Diggs is the 3239th most famous American and ranks 10th in famous people born in Oakland, California, U.S.

In general, Daveed Diggs ranks as the 5059th most popular famous person, and the 224th most popular rapper of all time. “The Famous Birthdays” catalogs over 25,000 famous people, everyone, from actors to actresses to singers to tiktok stars, from serial killers to chefs to scientists to youtubers and more. If you're curious to see who was born on your birthday, you can use our database to find out who, what, where, when and why. You can search by birthday, birthplace, claim to fame or any other information by typing in the search box, or simply browse our site by selecting the month, the day, the horoscope, or any other clickable option.