David Ospina Ramirez was 17 years old when he got his senior career start with Atletico Nacional in 2005. He joined Nice in France in 2008 in a transfer deal. After a six-year spell, he moved to Arsenal, where he ended up spending five years. His last season (2018/2019) with Arsenal was actualy spent on loan with Napoli. He joined the team permanently in 2019. The Colombian goalkeeper has represented his country in international tournaments since 2007.

He has a sister named Daniela who was married to fellow Colombian soccer star James Rodriguez from 2011 to 2017. Since 2012, he has been married to Jesica Sterling with whom he has two children.

He has received a lot of criticism from the media for what they have described as inconsistencies and unreliability. 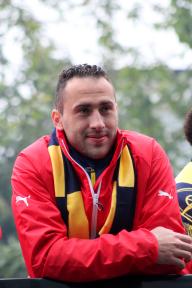 David's birthday is in 335 days

He was born in Medellín, Colombia.