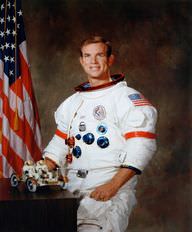 David Randolph Scott is a retired NASA astronaut, famously known for being the 7th man to walk on the moon and commanding the “Apollo 15” mission.

He was born in San Antonio, Texas. In 1954, he graduated from the “US Military Academy at West Point” and later joined the US Air Force, where he enrolled in flight training. He also received training as a test pilot at California’s “Edwards Air Force Base”. He holds a master’s degree in astronautics and aeronautics from the Massachusetts Institute of Technology (MIT).

In 1963, he was selected as part of the third batch of US astronauts. As a NASA astronaut, he embarked on several of the earliest space missions, including the “Gemini 8”, “Apollo 9”, “Apollo 12” and “Apollo 15”. However, he earned prominence for commanding “Apollo 15” during which he spent about three days on the moon.

Scott was on the Apollo-Soyuz Test Project’s administration team from 1972 to 1975. Later, he was appointed the Dryden Flight Research Center’s director. In 1977, he retired from the space program, and since then, he has provided advice for several space initiatives, including the Apollo 13 mission.

Title
Astronauts Neil A. Armstrong (right) and David R. Scott (left) sit with their spacecraft hatches open while awaiting the arrival of the recovery ship, the USS Leonard F. Mason after the successful completion of their Gemini VIII mission. They are assisted by U.S. Air Force Pararescuemen, who jumped to their spacecraft. The Pararescuemen are: A/2C Glenn M. Moore (by the hatch), A/1C Eldridge M. Neal (upper left); and S/Sgt Larry D. Huyett (center standing on the floatation collar). The overhead view shows the Gemini 8 spacecraft with the yellow flotation collar attached to stabilize the spacecraft in choppy seas. The green marker dye is highly visible from the air and is used as a locating aid.
Author
NASA
Source
http://commons.wikimedia.org/wiki/File:Armstrong_and_Scott_with_Hatches_Open_-_GPN-2000-001413.jpg
License
Public domain

David's birthday is in 246 days

He was born in San Antonio, Texas, U.S..