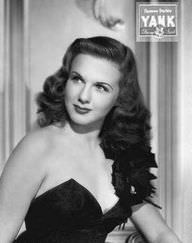 Deanna Durbin was a singer and actress from Canada who rose to prominence in the 1930s and the 1940s for her appearance in numerous musical films.

She sang a wide range of music styles, from pop classics to operatic arias, with the technical talent and vocal range of a true lyric soprano.

She began her acting career as a young actor in the filmed musical "Every Sunday," for which she won an Academy Award for Best Juvenile Actress. She went on to have widespread success in films and television shows such as "Show Business at War," "Three Smart Girls," "Because of Him," and "First Love" after her debut. Her works as a vocalist include "Mighty Like a Rose”, "O Come, All Ye Faithful", and "Home! Sweet Home!".

Her parents are James Allen Durbin and his wife Ada Durbin. She was raised with a sister called Edith. She married three times among them, Charles Henri David and Vaughn Paul.  Her children are Jessica Louise Jackson and Peter David.

At the age of ten, her parents discovered her voice potential and began sending her to a vocal teacher.

She became a citizen of America at a point in her life.

In 1938, she received a star on the Hollywood Walk of Fame.

Deanna's birthday is in 3 days

How old was Deanna when she died?

Deanna Durbin would be 100 years old if she was alive today.

Where was Deanna from?

She was born in Winnipeg, Manitoba, Canada.