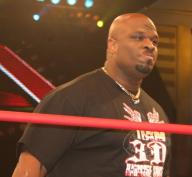 Devon Hughes, also known as D-Von Dudley, is a professional American wrestler famous for being the other half of the WWE tag team duo The Dudley Boyz, who are considered one of the finest tag teams professional wrestling has ever seen. Prior to being signed to the WWE, he wrestled for a number of promotions such as Extreme Championship Wrestling (ECW) and Total Nonstop Action Wrestling (TNA).

He was born to Bishop Preston Hughes and Pastor Renee Washington. He has been married multiple times and has fathered several children from these marriages.

He has held dozens of major championships between professional wrestling promotions such as WWE, ECW and TNA.

In 2012, he was placed at the 25th position on Pro Wrestling Illustrated’s annual list of the top 500 professional wrestlers (PWI 500).

Devon's birthday is in 350 days

Where is Devon from?

He was born in New Rochelle, New York, U.S..