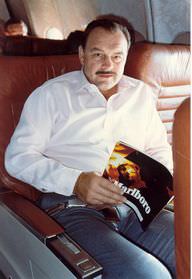 Richard Marvin Butkus, better known as Dick Butkus left a legacy as one of the all-time greatest linebackers in the history of professional football.

He spent the entirety of his football career (high school, college and professional) in the state of Illinois, where he played for the Chicago Vocational High School and Fighting Illini of the University of Illinois. In 1965, he was picked in the first round of the NFL Draft by the Chicago Bears, for which he would play until the end of the 1973 season, when he was forced to retire due to a knee injury.

He was raised alongside seven elder siblings in Chicago, Illinois by his electrician father, John and laundry worker mother, Emma. He and his wife, Helen Essenberg, to whom he has been married since 1963, have three children together.

He established himself as a broadcaster and actor following his NFL career.

Dick's birthday is in 13 days

Where is Dick from?