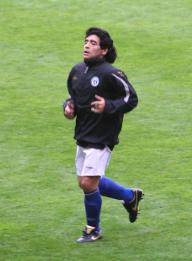 Diego Maradona was an Argentine football player and manager. He played as a striker for Boca Juniors, Barcelona, Napoli and the national team of Argentina, among others. He was known mainly for his superior ability in terms of ball control, passing, and dribbling. He was also a great free-kick specialist.

He won the Argentine Primera División, a Supercopa de España, a UEFA Europa League, a FIFA World Youth Championship and a FIFA World Cup. He was also named World Player of the Year many times and he is widely regarded as the greatest football player of all time, along with Brazilian legend, Pelé.

His career as a football manager began in 1994 at the Argentine football club named, Textil Mandiyú. There, he worked alongside Carlos Fren, who was his former teammate at the football club, Argentinos Juniors.

In October of 2008, he was unveiled as the head coach of his country’s national team. His first game in charge was against Scotland – the match ended in a 1-0 victory for Argentina.

He led his country to the quarter-finals stage at the 2010 FIFA World Cup that took place in South Africa. They were kicked out of the tournament after losing to Germany by 4-0.

He was the son of Diego Maradona Snr and Dalma Franco. His mum passed away in November 2011 and his dad, in June of 2015.

He was an elder brother to six siblings including professional footballers, Raúl and Hugo.

He had Italian, Croatian and Spanish ancestry. Between 1984 and 2004, the Argentine genius was married to Claudia Villafañe and had 2 children with her, namely Dalma and Gianinna.

For more than 20 years, he was a cocaine addict.

Maradona is also famous for scoring the first goal, dubbed “Hand of God' goal, against England at the quarter-finals of the FIFA 1986 World Cup tournament, which was held in Mexico. The goal, in which he scored using his hand, came in the 51st minute of the game.

Maradona went on to score another historical goal four minutes later. This time around he exhibited his outstanding dribbling techniques when he went past five English players and also dribbled past goalkeeper, Peter Shilton to score an absolutely amazing individual goal. The goal has been described as the “Goal of the Century”.

The match ended with Argentina winning by 2-1, with English striker, Gary Lineker scoring a consolation goal in the 81st minute.

Stature-wise, the legendary footballer was not the biggest player on the field during his playing days – he stood at 5 ft 5 in tall.

Maradona suffered a lot from alcohol and drug-related problems. For instance, he battled severe obesity after hanging his boots. He underwent a gastric bypass surgery and was put on a three month liquid diet to correct the situation.

At the beginning of 2019, he underwent surgery to correct a hernia-related internal bleeding situation in his stomach.

The football genius passed away on 25th November 2020 as a result of cardiac arrest. Few weeks before his demise, he had undergone a surgery to correct a type of brain bleed called Subdural hematoma.

His last managerial work was at the Argentine football club Gimnasia de La Plata – he was appointed as the club’s manger in 2019 and continued to work in that capacity until his sudden demise.

His debut for his nation’s senior national team happened in 1977. He retired from international football in 1994 after starring 91 times for Argentina – during those games he scored 34 goals.

I have 23 top players and they are all ready to put on the jersey and work on the pitch and that makes you happy and then you have peace of mind.Diego Maradona

Diego's birthday is in 337 days

How old was Diego when he died?

Diego Maradona would be 61 years old if he was alive today.

Where was Diego from?

He was born in Villa Fiorito, Lanús, Buenos Aires.

What was Diego Maradona's height?

People born on October 30 fall under the Zodiac sign of Scorpio, the Scorpion. Diego Maradona is the 53rd most popular Scorpio.

In general, Diego Maradona ranks as the 747th most popular famous person, and the 4th most popular soccer player of all time. “The Famous Birthdays” catalogs over 40,000 famous people, everyone, from actors to actresses to singers to tiktok stars, from serial killers to chefs to scientists to youtubers and more. If you're curious to see who was born on your birthday, you can use our database to find out who, what, where, when and why. You can search by birthday, birthplace, claim to fame or any other information by typing in the search box, or simply browse our site by selecting the month, the day, the horoscope, or any other clickable option.