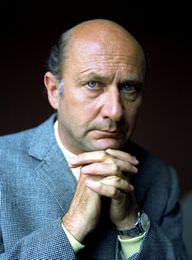 The late English entertainer, Donald Henry Pleasence was a stage actor before he made a name for himself through screen roles. He had served in the Royal Air Force as an aircraft wireless-operator during the Second World War but was captured and imprisoned by the Germans.

Upon his return from the war, he resumed his career in theatre. He is known best for starring in “Halloween” and four subsequent sequels as Dr. Samuel Loomis.

His parents’ names were Thomas Stanley Pleasence and Alice Armitage. He was a three-time divorcee. His fourth marriage ended with his death. He was the father of English actress Angela Pleasance and four others.

He was a four-time Tony Award nominee for the category of “Best Performance”. Some of his performances that got him nominated for the said award include Broadway plays such as “Wise Child” and “Poor Bitos”.

He received credit as an author for “Scouse the Mouse”, a children’s book.

Title
Cropped screenshot of Donald Pleasence from the trailer for the film Eye of the Devil
Author
Self made screen capture from a public domain film trailer
Licencing information : http://www.creativeclearance.com/guidelines.html#D2
Source
http://commons.wikimedia.org/wiki/File:Donald_Pleasence_in_Eye_of_the_Devil_trailer_1.jpg
License
Public domain

Donald Pleasence's birthday is on October 5, 1919.

How old was Donald when he died?

Donald Pleasence would be 103 years old if he was alive today.

Where was Donald from?

He was born in Worksop, Nottinghamshire, England, UK.