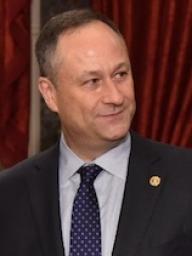 Douglas Emhoff is an American lawyer, and in January 2021 he became the Second Gentleman of the United States of America. And despite his personal professional achievements, his true claim to fame is being the husband of Vice President Kamala Harris.

He has two children named Ella and Cole via his first wife, Kerstin Emhoff (maiden name Mackin). He was married to Kerstin, who is a film producer, from 1992 and 2008.

He married Kamala Harris, who at that time was the Attorney General of California, in 2014.

He’s a graduate of Agoura High School in California.

He started his own law firm alongside fellow attorney Ben Whitwell in 2000.

He’s held high positions in powerful law firms including serving as a partner at the multinational law firm, DLA Piper.

Being a highly-renowned lawyer, his professional specialties include entertainment law, business law, real estate law and intellectual property cases. And in terms of entertainment law he even handled litigation involving the famous Taco Bell Chihuahua mascot.

Douglass Emhoff was thrust into the history books after his wife's inauguration, as vice president, on January 21, 2021. For instance, considering that Kamala Harris is the first woman Vice President in American history, he is also the very first Second Gentleman of the U.S. Also, he is the first spouse of a US Vice President who himself practices the Jewish faith.

He was raised in Brooklyn, New York.

He and Kamala Harris first became acquainted via a blind date in 2013. At the time, both of them were in their 40s.

Despite being divorced he and his first wife are still cool, with Kerstin Emhoff even helping with Kamala Harris’s political career.

He took a leave of absence from DLA Piper to lend a helping hand to Joe Biden’s successful campaign for the US Presidency.

He is known for not really being into politics himself, although as alluded to earlier he has been very supportive of his wife’s political career.

He officially wed Kamala Harris, in a privately-held ceremony, inside a courthouse in Santa Barbara, California.

His personal hobbies include playing golf. He is also a known aficionado of fantasy football.

He is known to be friends with Joe Biden’s wife, Jill Biden.

Douglas Emhoff's birthday is in 356 days

Where is Douglas Emhoff from?

People born on October 13 fall under the Zodiac sign of Libra, the Scales. Douglas Emhoff is the 1648th most popular Libra.

Aside from information specific to Douglas Emhoff's birthday, Douglas Emhoff is the 11547th most famous American and ranks 127th in famous people born in New York, U.S.

In general, Douglas Emhoff ranks as the 19620th most popular famous person, and the 32nd most popular lawyer of all time. “The Famous Birthdays” catalogs over 40,000 famous people, everyone, from actors to actresses to singers to tiktok stars, from serial killers to chefs to scientists to youtubers and more. If you're curious to see who was born on your birthday, you can use our database to find out who, what, where, when and why. You can search by birthday, birthplace, claim to fame or any other information by typing in the search box, or simply browse our site by selecting the month, the day, the horoscope, or any other clickable option.