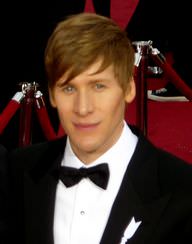 Title
Free free to use this photo. Just link to the photo page or Greg In Hollywood
Author
Greg Hernandez
Source
http://commons.wikimedia.org/wiki/File:Dustin_Lance_Black_at_the_81st_Academy_Awards.jpg
License
CC BY 2.0

Dustin is an American asset who has produced and directed some of the greatest shows.

Dustin is from a Mormon family, his mother suffered from polio and the father left them when he was young. Due to their beliefs and teachings he always worried about his sexuality especially when he realized he was only interested in boys. He was distraught and believed he was going to hell since his spiritual life was over. He was suicidal and kept to himself. However in senior high school, he gathered courage and made his sexuality public. He went on to study at UCLA School of Theatre, Film and Television.

He started working in theatres when he was in high school. He also worked as an apprentice for directors among others. After school, he directed the show “The Journey of Jared Price” which he also wrote. He also worked on “Something Close to Heaven”. Both shows had storylines about gay people. He worked as an author and worked on “A Story From Our Americas”. He is also one of the founders of American Foundation for Equal Rights.

He worked on the show “Milk” and won the award for Original Screenplay during the Academy Awards.

Dustin's birthday is in 256 days

Where is Dustin from?

He was born in San Antonio, Texas, U.S..