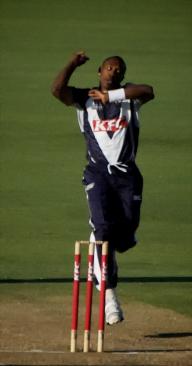 Dwayne Bravo is multiple award-winning cricket player who is known for his outstanding playing skills. He began his international career in 2002 after he represented his home country, Trinidad and Tobago against Barbados.

His father is John Bravo and his mum is called Joycelyn Bravo. His brother is fellow cricketer, Darren Bravo. He entered a romantic relationship with Regina Ramjit. His children are Dwaynice and Dwayne Bravo Jr.

He was awarded with the "Caribbean Premier League Player of the Series" in 2015.

People born on October 7 fall under the Zodiac sign of Libra, the Scales. Dwayne Bravo is the 2317th most popular Libra.

Aside from information specific to Dwayne Bravo's birthday, Dwayne Bravo is the 3rd most famous Trinidadian.

In general, Dwayne Bravo ranks as the 27598th most popular famous person, and the 64th most popular cricket player of all time. “The Famous Birthdays” catalogs over 25,000 famous people, everyone, from actors to actresses to singers to tiktok stars, from serial killers to chefs to scientists to youtubers and more. If you're curious to see who was born on your birthday, you can use our database to find out who, what, where, when and why. You can search by birthday, birthplace, claim to fame or any other information by typing in the search box, or simply browse our site by selecting the month, the day, the horoscope, or any other clickable option.