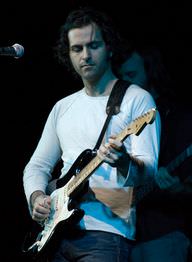 Ian Donald Calvin Euclid Zappa, name at birth but popularly known as Dweezil is an American guitarist and actor. His love for music stems from his father’s love for music.

His father, Frank Zappa, a music icon, gave him the names of his friends who were also into music. This happened because his birth name was rejected by the nurses in the hospital he was born in. He started a relationship with Lisa Loeb, also into music; they made music together and performed together. In 2005 however, he married Lauren Knudsen who filed for divorce about five years later.

He hosted the Dweezil & Lisa food show together with Lisa Loeb in 2004. Prior to that, he started his career at MTV but things did not go well for him when he went on The Howard Stern Show and shared unpleasant things about the company on the show. However, the act that put him on the map and made him famous was his cameo role in “Pretty in Pink”.

Title
Dweezil Zappa performing on the River Stage at Bluesfest 2008 in Ottawa.
Author
Benoit Aubry of Ottawa. Please notify me at benoit_aubry@hotmail.com if you intend to use this photo. I just want to keep track.
Source
http://commons.wikimedia.org/wiki/File:Dweezil_Zappa_by_Benoit_Aubry_of_Ottawa.JPG
Attribution
BenoitAubry at en.wikipedia
License
CC BY-SA 3.0

Dweezil's birthday is in 339 days

Where is Dweezil from?