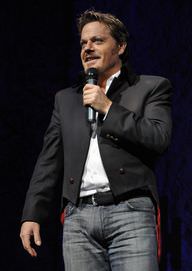 Eddie Izzard is an English stand-up comedian, actor, and writer.

Starting in the 1980s, Eddie Izzard did a lot of street performing in both the Europe and the U.S. His first stage performance was in 1987, and he started to gain notice with a lead role in The Cryptogram at London's Comedy Theatre. Though he continued to appear on stage, Izzard made his film debut in the 1994 TV movie Open Fire. He has since appeared in films such as The Avengers (1998), Oceans Twelve, Oceans Thirteen, and Valkyrie. Izzard has also starred on the television series The Riches.

When is Eddie's birthday?

In how many days is Eddie's birthday?

Eddie's birthday is in 130 days

How old is Eddie?

Eddie was born in Aden, Yemen.