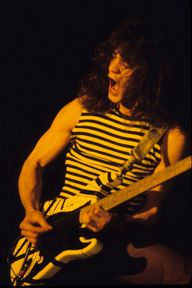 He was a musician, producer, songwriter and inventor who was of Dutch-American descent. Eddie Van Halen was the founder of American hard rock band, Van Halen alongside his brother, Alex Van Halen, singer David Lee Roth and bassist Michael Anthony.

He got married to American actress and television host, Valerie Bertinelli in 1981 and their marriage spanned for about 26 years before they divorced in 2007.

In 2009, he got married to Janie Liszewski. His son is Wolfgang Van Halen, who is a bassist.

In a Guitar World magazine reader's poll in 2012, he got voted number one on the list of "The 100 Greatest Guitarist of All Time".

In 1992, he won the "Best Hard Rock Performance" at the Grammy Awards.

He got nominated for the "Best Hard Rock Performance" at the 1996 Grammy Awards.

He lost over one third of his tongue to cancer in 2001.

He started drinking and smoking at the young age of 12.

In November of 1999, the late singer had a hip replacement surgery. And in 2012, he underwent surgery for severe colon diverticulitis, which led to him postponing his tour dates in Japan.

He died of throat cancer, which he struggled with during the latter stages of his life.

'For Unlawful Carnal Knowledge' took a year to record that's why the playing on it might sound somewhat labored. 'Balance,' on the other hand, was written and recorded in only four months, so the whole process was quicker and more immediate.Eddie Van Halen

David Lee Roth had the idea that if you covered a successful song, you were half way home. C'mon - Van Halen doing 'Dancing in the Streets'? It was stupid. I started feeling like I would rather bomb playing my own songs than be successful playing someone else's music.Eddie Van Halen

I mean it's funny, playing music, how of course you want it to do well, you want them to like it, but it's not competitive like an election, it's the Olympics, it's not a Formula 1 race. The Billboard charts are just to show you what people like.Eddie Van Halen

I never dreamt of being a musician for my livelihood. I certainly never would have wanted to be in the business that I'm in, meaning the fame and the glory, the glitter, the rock star, the famous part.Eddie Van Halen

I never took guitar lessons. I took classical piano lessons from the age of six when we lived in Holland.Eddie Van Halen

I never took guitar lessons. I took classical piano lessons from the age of six when we lived in Holland. And when we moved to America, it was just the typical thing except I was really good at it so was my brother.Eddie Van Halen

I'm blessed with a good pair of ears. That's how I fooled my piano teacher. I'd watch his fingers and I'd listen to it, and I just kind of basically learned it by myself.Eddie Van Halen

If you want to be a rock star or just be famous, then run down the street naked, you'll make the news or something. But if you want music to be your livelihood, then play, play, play and play! And eventually you'll get to where you want to be.Eddie Van Halen

It's funny, when bands or younger musicians ask me: 'So, what does it take to make it?' Well, first explain to me what you mean by 'making it': Do you want to be a rock star or do you want music to be your livelihood?Eddie Van Halen

Music is for people. The word 'pop' is simply short for popular. It means that people like it. I'm just a normal jerk who happens to make music. As long as my brain and fingers work, I'm cool.Eddie Van Halen

On 'Van Halen,' I was a young punk, and everything revolved around the fastest kid in town, gunslinger attitude. But I'd say that at the time of 'Fair Warning,' I started concentrating more on songwriting. But I guess in most people's minds I'm just a gunslinger.Eddie Van Halen

The name Van Halen, the family legacy, is going to go on long after I'm gone.Eddie Van Halen

We're musicians. We make music for a living. It's that simple. Nothing else matters.Eddie Van Halen

When I'm home on a break, I lock myself in my room and play guitar. After two or three hours, I start getting into this total meditation. It's a feeling few people experience, and that's usually when I come up with weird stuff. It just flows. I can't force myself. I don't sit down and say I've got to practice.Eddie Van Halen

How old was Eddie Van Halen when he died?

Eddie Van Halen would be 66 years old if he was alive today.

Where was Eddie Van Halen from?

He was born in Nijmegen, Netherlands.

People born on January 26 fall under the Zodiac sign of Aquarius, the Water Bearer. Eddie Van Halen is the 878th most popular Aquarius.

In general, Eddie Van Halen ranks as the 12655th most popular famous person, and the 35th most popular guitarist of all time. “The Famous Birthdays” catalogs over 40,000 famous people, everyone, from actors to actresses to singers to tiktok stars, from serial killers to chefs to scientists to youtubers and more. If you're curious to see who was born on your birthday, you can use our database to find out who, what, where, when and why. You can search by birthday, birthplace, claim to fame or any other information by typing in the search box, or simply browse our site by selecting the month, the day, the horoscope, or any other clickable option.