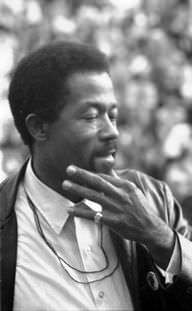 Eldridge Cleaver had a troubled childhood as he was involved in a number of crimes which saw him spend some of his days in correctional centers. In 1965, while he was still in prison, he wrote a memoir which was entitled “Soul on Ice”. After he was freed from prison the following year, Cleaver started working with Ramparts magazine as a writer.

He went on to publish many books with some titled “Eldridge Cleaver: Post-Prison Writings and Speeches” and “Soul on Fire”.

Cleaver was also famous for her role as a “freedom fighter”. In 1966, he joined the Black Panther Party as they sought to fight for the freedom of blacks in the United States. It has been suggested that his fall out with Huey P. Newton was one of the reasons for the collapse of the group.

He later established the Black House cultural center alongside Marvin X, and Ed Bullins. He also joined the Republican Party and attended most of their events.

He was an offspring of Thelma Hattie Robinson and Leroy Cleaver. He spent his childhood with his four siblings Theophilus Henry, Wilhelima Marie, James Weldon, and Helen Grace.

The Arkansas-born writer was married to Kathleen Cleaver from 1967 to 1987 and together they had two kids.

He was sent to jail for drug-related crimes at age 18.

Eldridge's birthday is in 336 days

How old was Eldridge when he died?

Eldridge Cleaver would be 87 years old if he was alive today.

Where was Eldridge from?

He was born in Wabbaseka, Arkansas, U.S..