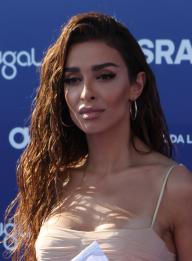 Greek singer and dancer, Eleni Foureira, is best known for her hit album, titled, “PSR (Party Sleep Repeat)” in 2014. She performed with the band group, named, “Mystique” from 2007 to 2009. She featured in the reality show, called “So You Think You Can Dance” in 2017.

Her parents, Marjeta and Kristaq named her Entela Fureraj. She began dating professional footballer, Alberto Botía in 2016. She grew up with her siblings named, Ioanna, Margarita, and Giorgos.

She received the “Best Modern Female Artist” award at the MAD Video Music Awards in 2018. Prior to that, she had been presented with the “Best Dance Video” and “Best Video with a Cause” awards at the same event in 2015 and 2017.

In 2018, Foureira placed second at the Eurovision Song Contest in Portugal.

Her height measures at 5 feet 7 inches.

In 2010, it was speculated that Foureira had tried to naturalize as a Greek citizen.

The Greek media reported she was born in Albania in 2013.

People born on March 7 fall under the Zodiac sign of Pisces, the Fish. Eleni Foureira is the 878th most popular Pisces.

In general, Eleni Foureira ranks as the 11523rd most popular famous person, and the 1204th most popular singer of all time. “The Famous Birthdays” catalogs over 25,000 famous people, everyone, from actors to actresses to singers to tiktok stars, from serial killers to chefs to scientists to youtubers and more. If you're curious to see who was born on your birthday, you can use our database to find out who, what, where, when and why. You can search by birthday, birthplace, claim to fame or any other information by typing in the search box, or simply browse our site by selecting the month, the day, the horoscope, or any other clickable option.