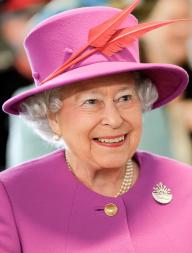 Title
Her Majesty the Queen during her visit to HMS Ocean in Devonport to preside over a ceremony to rededicate the ship.
Author
Original: Joel Rouse/ Ministry of Defence
Derivative: nagualdesign
Source
https://en.wikipedia.org/wiki/File:Queen_Elizabeth_II_in_March_2015.jpg
Attribution
Joel Rouse (Ministry of Defence), and nagualdesign
License
OGL 3

Elizabeth II is the Queen of the United Kingdom. She also serves as monarch of the Commonwealth realms shattered throughout the world which fall under her jurisdiction. Queen Elizabeth II ascended to the throne when her father and predecessor, King George VI, passed away in 1952. Since then she has set quite a few outstanding records as Queen. For instance, with her rule spanning over half a century, she is the longest-reigning monarch in British history. Likewise, Queen Elizabeth II set the record for the longest-living British monarch. Moreover she was the first female member of the royal family to join the British armed forces when, at the age of 18, she trained and is credited with serving as a mechanic during World War II. In all, Queen Elizabeth II is internationally-popular and for the most part beloved by her countrymen.

Elizabeth married Prince Philip, Duke of Edinburgh in November of 1947. Together, they brought four children into the world - Charles, Prince of Wales (1948), Anne, Princess Royal (1950), Prince Andrew, Duke of York (1960) and Prince Edward, Earl of Wessex (1964). If Queen Elizabeth II were to pass away, the heir apparent to inherit the British throne would be her eldest son, Prince Charles.

On the 20th of November 2017, the Queen celebrated the 70th anniversary of her marriage with Prince Philip. By so doing, she set a record as the first ruler in the history of Britain to celebrate a platinum marriage anniversary.

After Robert Mugabe quit his position as head of state of Zimbabwe in 2017, Queen Elizabeth II became the oldest head of state in the world.

According to reports, each and every night, Queen Elizabeth drinks a glass of champaign before retiring to bed.

On the 8th of May 1945, after being permitted by their parents, the Queen together with her sister, Margaret commemorated the end of World War II by joining massive crowds outside the palace to jubilate. The Queen and her sister’s adventure during that night was dramatized in the 2015 British film entitled A Royal Night Out.

The Queen celebrates her birthday twice each year. Even though her original birthday falls on the 21st of April, officially and as a queen, her official birthday is celebrated in June, each year.

The Queen has her private ATM, which is located at Buckingham Palace and it is designated for use only by her.

Ever since the early 90s, Elizabeth opted to pay her taxes, even though by law, she is not required to do so.

Queen Elizabeth II does not own a driver’s license or a passport. Actually, she does not need them, since both passports and driving licenses are issued in the name of the Queen.

Elizabeth's birthday is in 211 days

Where is Elizabeth from?

She was born in London, UK.

Elizabeth II is a famous Queen of the United Kingdom and the other Commonwealth realms, who was born on April 21, 1926. As a person born on this date, Elizabeth II is listed in our database as the 1st most popular celebrity for the day (April 21) and the 2nd most popular for the year (1926).

People born on April 21 fall under the Zodiac sign of Taurus, the Bull. Elizabeth II is the 8th most popular Taurus.

In general, Elizabeth II ranks as the 83rd most popular famous person of all time. “The Famous Birthdays” catalogs over 40,000 famous people, everyone, from actors to actresses to singers to tiktok stars, from serial killers to chefs to scientists to youtubers and more. If you're curious to see who was born on your birthday, you can use our database to find out who, what, where, when and why. You can search by birthday, birthplace, claim to fame or any other information by typing in the search box, or simply browse our site by selecting the month, the day, the horoscope, or any other clickable option.