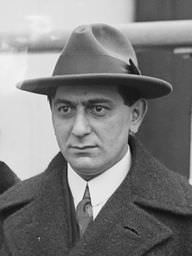 German-born American actor Ernst Lubitsch was an actor who doubled as a film director and producer. He rose to fame for his comic roles and later became one of the most experienced directors in Hollywood.

The actor was born to Simon and Anna Lubitsch. It is said that he discovered his talent very early in his childhood and decided to enroll in theatre. To further hone his talents in acting, he became a member of Max Reinhardt's Deutsches Theater in 1911.

Lubitsch made his professional acting debut in 1913 in the movie "The Ideal Wife". He later appeared in numerous movies, such as "Sumurun" in 1920.

He delved into the world of directing and produced interesting movies such as "Die Augen der Mumie Ma" in 1918, “The Student Prince in Old Heidelberg" in 1927, and " The Smiling Lieutenant" in 1931. His contribution to television earned him a Special Academy Award in 1947.

Ernst's birthday is in 359 days

How old was Ernst when he died?

Ernst Lubitsch would be 131 years old if he was alive today.

Where was Ernst from?

He was born in Berlin, Germany.