Ernst Julius Günther Röhm had been a member of the German Workers’ Party and subsequently Adolf Hitler’s ally before the formation of the party’s successor, the Nazi Party. He later co-founded Sturmabteilung, the original paramilitary wing of the Nazi Party. He also became its commander, serving from 1931 until 1934.

He grew up as the last of the three children of railway official Julius Röhm and his wife, Sofia Emilie.

He was one of the many people killed in what is historically referred to as “The Night of the Long Knives”. It was a purge ordered by Hitler to reinforce his supremacy by eliminating those he found as a threat to his power. In the case of Röhm, a treason was forged against him with falsified evidence. He was shot to death on 1st July 1934. 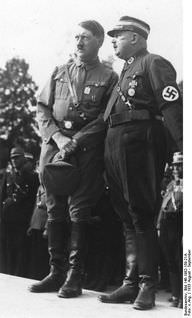 Ernst's birthday is in 302 days

How old was Ernst when he died?

Ernst Röhm would be 135 years old if he was alive today.

Where was Ernst from?

He was born in Munich.