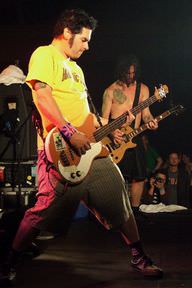 While in high school, American singer Fat Mike, born Michael John Burkett, joined a music group known as False Alarm. The group broke up in 1983, and with Erik Sandin and Eric Melvin, he formed the NOFX band later that year.

He mostly performs as the lead singer, though he sometimes helps by playing other instruments like the piano and guitar. By the end of 2021, he had recorded 14 studio albums with the collective including their maiden one titled “Liberal Animation”.

He has also been a member of the Me First and the Gimme Gimmes music group. In 1997, he helped them to issue their first album which was under the name “Have a Ball”.

Aside from his works with the aforementioned collectives, the Massachusetts-born singer has also worked with other renowned musicians and bands. He appeared on Dropkick Murphys’ song titled "Going Out In Style" which was included in their 2011 album of the same name.

The singer has also made the headlines for his stance against the George W. Bush-led administration. In 2004, he created an online platform known as punkvoter.com to gather fans to vote against the then leader of the United States. That same year, he initiated the ‘Rock Against Bush’ project which had the same ambition.

His 18 years marriage to Erin ended in 2010. During their time together, they raised a daughter named Darla. In 2016, he tied the knot with Soma Snakeoil.

He graduated from San Francisco State University in 1990.

He was influenced by American entertainer Joe Escalante.

He co-wrote a musical dubbed “Home Street Home” which was released in 2015.

Fat Mike's birthday is in 124 days

Where is Fat Mike from?