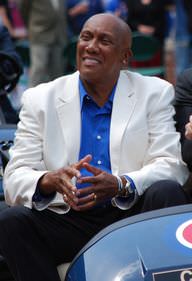 Born into a family with a good history in sports, Ferguson Jenkins participated in many sporting events before settling on baseball as his preferred game. During his teen stage, he was mostly used as a 1st baseman before gradually turning into one of the best pitchers of his time.

The Canadian began playing in the MLB in 1962 when he joined the Philadelphia Phillies. He went on to feature for many top teams like Boston Red Sox, Chicago Cubs, and Texas Rangers.

Jenkins turned his attention to politics after ending his playing career. He contested for a position at Windsor—Riverside electoral riding on the tickets of the Ontario Liberal Party.

He won the National League’s Cy Young Award in 1971. During his playing days, he was named to three All-Star.

In 1991, his name was included in the National Baseball Hall of Fame, becoming the first player from Canada to achieve this feat.

He also won Canada’s Lou Marsh Trophy in 1974. Five years later, he became a “Member of the Order of Canada”.

As part of efforts to honor him, the Chicago Cubs’ No. 31 jersey has been retired.

In 1980, he was arrested for allegedly smuggling illegal drugs outside the country.

Mental attitude and concentration are the keys to pitching.Ferguson Jenkins

Ferguson's birthday is in 6 days

Where is Ferguson from?

He was born in Chatham, Ontario, Canada.

People born on December 13 fall under the Zodiac sign of Sagittarius, the Archer. Ferguson Jenkins is the 2065th most popular Sagittarius.

In general, Ferguson Jenkins ranks as the 28823rd most popular famous person, and the 321st most popular baseball player of all time. “The Famous Birthdays” catalogs over 40,000 famous people, everyone, from actors to actresses to singers to tiktok stars, from serial killers to chefs to scientists to youtubers and more. If you're curious to see who was born on your birthday, you can use our database to find out who, what, where, when and why. You can search by birthday, birthplace, claim to fame or any other information by typing in the search box, or simply browse our site by selecting the month, the day, the horoscope, or any other clickable option.