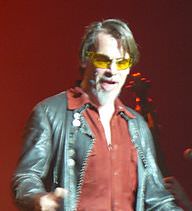 The French tenor-baritone pop star had his share of plummeting periods and resounding comebacks in his career. In 1998, he was named “Male Artist of the Year” at the Victoires de la Musique.

Born in Chalon-sur-Saône, he dropped out of school at age 16 and got his hands full working odd jobs. He started his artistic journey playing minor roles in popular films such as the 1982 French film “La Balance." He starred opposite stars like Nathalie Baye, Christophe Malavoy and Philippe Léotard.

“Merci” and His Professional Life

After a couple of roles on TV shows, he released his first album “Merci” in 1990. The album garnered much controversy .due to its lyrical content. The French press sought to mire his career even before it could take off. Six years later, under the pseudonym Sam Brewski, he made a couple of hit albums that peaked the charts. “Savoir aimer,” for instance, ranked 1st on both France’s SNEP and Belgium's Ultratop charts. Other successful albums were “Châtelet Les Halles” in 2000 and “Baryton” in 2004.

He fell in love and married painter Azucena Caamaño in 2006. They have 2 children together.

Florent's birthday is in 32 days

Where is Florent from?

He was born in Chalon-sur-Saône, France.