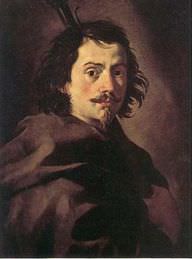 Francesco Borromini played an active role in the development of the Baroque architecture style which began in the 17th Century. The Italian’s ability to combine Classical architectural styles and symbols made him one of the most admired architects during that period.

Throughout his career, he worked on many historical structures including the Sant'Ivo alla Sapienza and the San Carlo alle Quattro Fontane churches.

At birth, he was christened Francesco Castelli.

He committed suicide at the age of 67 years.

He worked as a stonemason before starting his architectural career.

Francesco Borromini's birthday is on September 25, 1599.

Francesco's birthday is in 233 days

How old was Francesco when he died?

Francesco Borromini would be 423 years old if he was alive today.

Where was Francesco from?

He was born in Bissone.