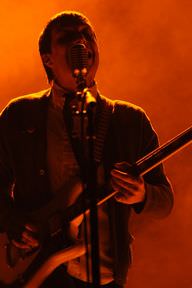 American musician Frank Iero experimented with different bands from age 11 before he became the lead vocalist for the now-defunct band Pencey Prep. He is known best for being the rhythm guitarist of the rock band, My Chemical Romance for which he has contributed to the albums  “Three Cheers for Sweet Revenge” and “The Black Parade”. He is also known for his solo singles such as “This Song Is a Curse ” and “Extraordinary Girl”.

He grew up taking inspiration from his father and grandfather who were both musicians. His mother also allowed him to use her basement for band practice. He has been married to Jamie Nestor since 2007. They have twin daughters called Lily and Cherry as well as a son, Miles.

He was also the frontman of the hardcore punk band called Leathermouth from 2007 until the members split in 2010. With the band, he released the album titled "XO".

Frank's birthday is in 29 days

Where is Frank from?

He was born in Belleville, New Jersey, U.S..