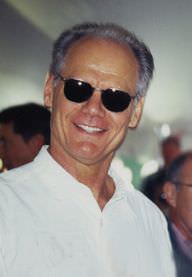 John Frederick Dryer is a retired American football player who played actively in the NFL from the late 1960s to the early 1980s. He started playing in the league in 1969 after he was drafted by the New York Giants in the same year. He transferred to the Los Angeles Rams in 1972, eventually retiring from the game with the team almost a decade later.

Dryer, who has been working as an actor, screenwriter and radio host since his retirement from the NFL, is also well-known for portraying Sgt. Rick Hunter in the crime drama television series, “Hunter”.

He is the son of Genevieve Nell and Charles F. Dryer. He has a daughter with 1983 Playboy Playmate, Tracy Vaccaro to whom he was married to from 1983 until their 1988 divorce.

Fred's birthday is in 274 days

Where is Fred from?

He was born in Hawthorne, California, U.S..