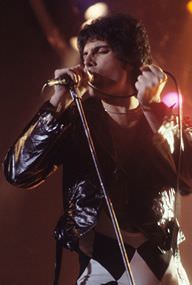 Freddie Mercury was a British singer and songwriter. He was best known as the lead vocalist of the rock group Queen. He released 2 solo albums (one with soprano Montserrat Caballé) and 15 studio albums with Queen.

He was nominated for 5 Grammy Awards with Queen. He won 5 Ivor Novello Awards and 5 Brit Awards.

He was born in Zanzibar (now Tanzania). He was openly gay. He died in 1991 of bronchopneumonia brought on by AIDS. He was the first major star to die of AIDS.

Freddie Mercury's birthday is on September 5, 1946.

Freddie's birthday is in 21 days

How old was Freddie when he died?

Freddie Mercury would be 75 years old if he was alive today.

Where was Freddie from?

He was born in Zanzibar.