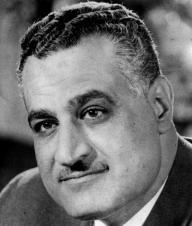 Gamal Abdel Nasser was noted to be the second President of Egypt who ruled between 1954 till 1970 when he died. He is noted to have played a front row in the 1952 overthrow of the monarchy and went ahead to make massive reforms just a year after. In 1954, a failed assassination attempt was made on his life by a group known as "Muslim Brotherhood", which prompted him to go hard on the said group and soon decided to put the presiding president, Mohammed Naguib, who was Egypt's first president under arrest and automatically installed himself into office and assumed executive roles. He was officially sworn into office as president in June of 1956.

He was born to Abdel Hussein who was a postal worker and mother, Fahima Nasser. He had three brothers, al-Leithi and Izz al-Arab and Shawki.

He married his wife, Tahia Kazem in 1954 and they both had five children; Mona, Hoda, Abdel Hamid, Khalid and Abdel Abdel Hakim.

In 1965, he was given "Honorary Recipient of the Order of the Crown of the Realm" in Malaysia.

In 1965, he was ordained "Order of the Republic" in Tunisia.

He was a chain-smoker.

His hobbies were reading Arabic, English and French magazines, listening to classical music, and Chess playing.

Saudi Islamist and leader of al-Qaeda

People born on January 15 fall under the Zodiac sign of Capricorn, the Sea Goat. Gamal Abdel Nasser is the 2239th most popular Capricorn.

In general, Gamal Abdel Nasser ranks as the 32100th most popular famous person, and the 394th most popular country president (prime minister) of all time. “The Famous Birthdays” catalogs over 25,000 famous people, everyone, from actors to actresses to singers to tiktok stars, from serial killers to chefs to scientists to youtubers and more. If you're curious to see who was born on your birthday, you can use our database to find out who, what, where, when and why. You can search by birthday, birthplace, claim to fame or any other information by typing in the search box, or simply browse our site by selecting the month, the day, the horoscope, or any other clickable option.