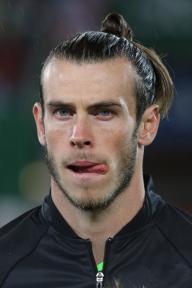 Welsh football icon, Gareth Bale started his senior career in 2006 with Southampton before moving to Tottenham Hotspur a year after. He left Tottenham to play for Real Madrid in 2013. Bale has featured for the Wales under 17, 19, and 21 teams. The winger made his senior national team debut in 2006.

He has also won numerous “Welsh Footballer of the Year” awards – this includes receiving the honor in succession from 2010 to 2016.

He lives in Madrid with Emma Rhys-Jones, his high school girlfriend. They have a daughter.

As a teenager (14 years old), he ran the 100 metre sprint in 11.4 seconds. He has been regarded as one of the fastest football players in the world.

Being a Real Madrid player, Bale has featured alongside the likes of Cristiano Ronaldo, Ángel Di María, Karim Benzema, and Luka Modrić

Gareth's birthday is in 224 days

Where is Gareth from?

He was born in Cardiff, Wales.

What is Gareth Bale's height?

Gareth Bale is a famous Welsh football player, who was born on July 16, 1989. As a person born on this date, Gareth Bale is listed in our database as the 3rd most popular celebrity for the day (July 16) and the 16th most popular for the year (1989).

People born on July 16 fall under the Zodiac sign of Cancer, the Crab. Gareth Bale is the 64th most popular Cancer.

Aside from information specific to Gareth Bale's birthday, Gareth Bale is the 2nd most famous Welsh and ranks 1st in famous people born in Cardiff, Wales.

In general, Gareth Bale ranks as the 856th most popular famous person, and the 7th most popular soccer player of all time. “The Famous Birthdays” catalogs over 40,000 famous people, everyone, from actors to actresses to singers to tiktok stars, from serial killers to chefs to scientists to youtubers and more. If you're curious to see who was born on your birthday, you can use our database to find out who, what, where, when and why. You can search by birthday, birthplace, claim to fame or any other information by typing in the search box, or simply browse our site by selecting the month, the day, the horoscope, or any other clickable option.